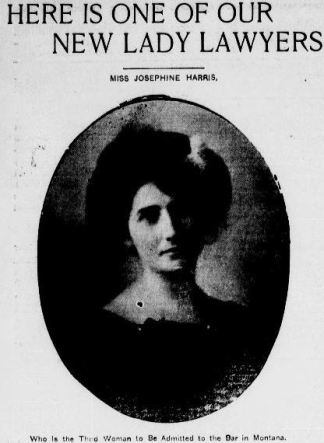 +++++“Third to be admitted to practice law in the courts of Montana and one of the youngest ever given this right in the United States, are the distinctions enjoyed by Miss Josephine Harris of Helena. Her career will be watched with interest by the other attorneys of the state.
+++++When Miss Harris appeared before the supreme court a few days ago, accompanied by Sol Hepner, who acted as her sponser [sic] before the tribunal, she was entirely self-possessed. Though all about her were men and the court chamber had held but few of the gentler sex, she was not nervous.
+++++The three men who just now comprise the supreme court are rigid in upholding the dignity of the courts as well as in maintaining a high standard of proficiency among lawyers admitted to practice. To a stranger, therefore, the searching inquisitory process might have seemed harsh, far too strict for a woman.
+++++But Miss Harris answered questions rapidly and without hesitation. These were asked with great rapidity and the running fire of interrogations would have tested many able attorneys. Practically all were answered correctly and to the satisfaction for the court, for the order to enroll her name among the members of the bar came immediately after the conclusion of the examination.
+++++Miss Harris was reared in Helena and received her early education here. She obtained her law training in Leland Stanford university, where she took high honors in her class. Before returning here she was admitted to the bar in California. She intends to practice in Helena.”

+++++“The Helena friends of Miss Josephine Harris, a former resident of this city [Helena], will be pleased to learn that she has been admitted to the bar of California.”

+++++“Miss Josephine Harris of this city was admitted to practice law in Montana upon motion of H. S. Hepner in the supreme court yesterday.”

+++++“Miss Josephine Harris, a stylishly gowned young woman was yesterday admitted to the bar by the supreme court. She is the third woman lawyer in Montana. She lives in Helena.”

+++++“What appears to have been the culmination of a pretty romance occurred in Butte Wednesday evening in the marriage of Miss Josephine Harris, of Helena, to W. E. Sherwood, of San Francisco.
+++++Miss Harris was assistant county attorney of Lewis and Clarke county, and is recognized as a bright light in the legal profession; a popular young woman and of great ability.
+++++The romance is said to have begun in California, where Miss Harris was attending the Stanford university. She graduated from there and came to Helena to practice her profession, to which place she was followed by Mr. Sherwood.
+++++The couple came to Butte, where the knot was tied, and with a few intimate friends an informal dinner was given, after which the bride and groom left on their honeymoon. The whole thing was kept a secret and the marriage will come as a surprise to the many friends of Mrs. Sherwood in Helena.”

+++++“In Butte Wednesday Miss Josephine Harris, deputy county attorney of this county, was united in marriage to Will Sherwood, a prominent young attorney of San Francisco, the wedding being the culmination of a very pretty romance dating back to the time the bride and grood [sic] studied law down at Leland Stanford university several years ago. News of the wedding was received in Helena today, and no little surprise was occasioned by the announcement. The fact that the wedding took place in Butte at the home of a friend of the bride instead of at the bride’s home shows the legal training of the deputy county attorney.
+++++Mr. Sherwood is a gentile and Miss Harris is a Jewess. When the parents of the bride learned that their daughter was looking with favor upon the young man from San Francisco they did not take the matter under advisement, but issued a peremptory injunction against the proposed match. In vain did the daughter plead for a rehearing of the case upon its merits. In the jurisprudence of love the fair trial bill is known as an elopement, and in this case the fair trial bill was resorted to. Last Monday Miss Harris left for Butte, her announced intention being to visit an old friend, Mrs. Theodore Rinda, formerly of Helena. By some decree of fate Mr. Sherwood happened to be in Butte at the same time and at the residence of Mr. and Mrs. Rinda the wedding ceremony was performed.
+++++Mrs. Sherwood today telegraphed County Attorney Working that she would return to Helena Saturday evening. She has not as yet announced her resignation, but this is expected shortly, and it is said the newly-married couple will take up their residence in San Francisco. When Miss Harris was a law student at Stanford university she was the only girl in her class which numbered upwards of forty. Her classmates gave her the name of Portia, and among her intimate friends the name still holds. She did not finish her legal course at Stanford, but removed to Berkeley, where she was graduated with honors. She successfully passed the law examination before the supreme court of California and was admitted to practice. On the California certificate she was admitted to the bar of Montana, enjoying the distinction of being the youngest woman who has entered the ranks of Montana lawyers.
+++++When County Attorney Lincoln Working took his office last January he announced the appointment of Miss Harris as his deputy and she has since filled this position. While she has not appeared in the any of the big cases since her appointment in those which have been entrusted to her care she has acquitted herself with credit.
+++++Among the employees of the courthouse and the newspaper men the deputy county attorney was a general favorite, and while they are all willing to extend their congratulations to Mr. Sherwood, they do not hesitate to conceal their chagrin at the fact that the bright young woman will probably shortly request that her name be stricken from the county payroll.
+++++Mr. Sherwood is a graduate of Stanford university and is highly spoken of by those who know him.”

+++++“W. C. Sherwood, the painter of Jackson, received a clipping from a Montana paper this week, stating that his son, Will Sherwood, was married in Butte last week to Miss Josephine Harris. The wedding is the outcome of an attachment formed several years ago, when the contracting parties were students together at Stanford University. Mr. Sherwood is a graduate of Stanford, while his wife finished her studies at the Berkeley Institution, from which she graduated with honors. The bride is a Jewess. Mr. Sherwood is a Gentile. The parents of the girl opposed the match on the ground of religious differences, but their objections were overruled by what is commonly called an elopement, ending in the wedding referred to. Mr. Sherwood is a rising lawyer of San Francisco. Prior to her marriage Miss Harris had been deputy county attorney at Butte, Montana. The pair will make their home in San Francisco.”

+++++“Herman Harris, for many years a resident of Helena, died yesterday morning at his residence, 536 Eight avenue, at the age of 82 years. . . .
+++++Mr. Harris came to Helena 26 years ago, and engaged in the real estate business here and soon amassed considerable property. He is survived by his wife, two sons, Harry and Sol, both of New York, and a daughter, Mrs. Josephine Sherwood, formerly of Helena, but now of Alameda, Cal., who hastened to her father’s bedside when the news of his illness reached her.
+++++The funeral . . . services will be held under the auspices of the congregation of the Jewish synagogue of which Mr. Harris was a member. . . .
+++++The pallbearers will be Moses Morris, E. D. Zimmerman, E. Fischl, M. Finklestein, H. Tonn, and Mr. Sands.”

+++++“The body of William E. Sherwood, late President of the Pacific Coast Land Company, and mine owner, who died suddenly in Phoenix, Ariz., May 8th, where he was sojourning for his health, was brought here for burial. . . .
+++++Mr. Sherwood was a native son of California. He attended the University of the Pacific at Santa Clara, giving two years to study and research. Then he went to the Leland Stanford, Jr., University. About this time the Spanish-American War occurred, and he enlisted. But the regiment, after months of waiting for service, was disappointed, and mustered out. He returned to his studies.
+++++In 1903 he met and married Josephine Harris, of Montana, also a Stanford student. After a year spent traveling through the East, he returned to Oakland to go into the real estate business, already having large mining interests. He was a prominent member of several clubs, and his habitual cheerfulness made him socially a rare companion. Ione mourns his loss.”

+++++“Helena friends and relatives yesterday received word of the death in New York city of a former Helena resident, Mrs. Josephine Sherwood.
+++++Mrs. Sherwood, formerly Miss Josephine Harris, was a graduate of Helena high school and one of the first women admitted to the bar in Montana. She served as deputy in the county attorney’s office under Lincoln Working. The Harris family formerly lived at 524 Eighth avenue.
+++++Miss Sherwood was a cousin of Mrs. H. S. Hepner and the Misses Alice and Selma Israel of the Bonneville apartments.
+++++Internment was in New York city.”