+++++Entered the senior class of Indiana Law School of the University of Indianapolis; graduated May 1901

+++++26 December 1905 — Cincinnati Enquirer
+++++“One of the Attorneys in the Gillespie Trial, is Now a Bride”
+++++“Mr. Wymond G. Sink and Miss Cynthia A. Coles surprised their many friends by being quietly married at the residence of the bride’s parents, Captain and Mrs. John B. Coles. Rev. Ira A. Paternoster, pastor of the first Presbyterian Church, officiated in the presence of the members of the immediate families and a few intimate friends.
+++++After a sumptuous luncheon the happy couple left for a bridal trip through the south.
+++++Mr. Sink is the Recorder of Ohio County and Democratic county Chairman. His bride has been associated with her father in the practice of law for several years, and is the only lady ever admitted to practice at the bar in the Seventh Judicial District and to be admitted as a member of the Dearborn and Ohio Bar Association.
+++++She assisted her father in the defense of the celebrated Gillespie murder trial.”

+++++May 13, 1911 — Indianapolis News
+++++“Woman Lawyer Divorced.  Pleads Her Own Case and Gets Decree and Maiden Name.
+++++Judge George E. Downey has granted Mrs. Cynthia Coles Sink an absolute divorce from Wymond G. Sink, former Ohio county recorder, and restored her maiden name, Cynthia Coles.  She is a practicing attorney and prepared her divorce petition and conducted her case.  She had petitioned for $1,500 alimony, but withdrew this request at the trial.  Miss Coles was associated with her father, Captain John H. Coles, in the Gillespie murder trial in Rising Sun a few years ago.”

+++++” . . . Miss Cynthia Coles, daughter of Captain J. B. Coles, one of the best criminal lawyers in this section, was admitted to the bar. Miss Coles in an accomplished young lady in social circles, and of late years has acted as stenographer and studied law with her father with the intention of completing the profession.” 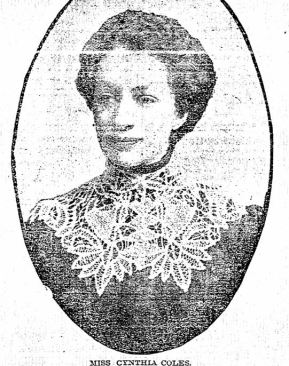 For a little about the reporter, Jessie M. Partlon, see http://handeaux.tumblr.com/post/94242310237/cincinnatis-scrappy-girl-reporter-fought-for

+++++” . . . . Probably the most famous Indiana case in which a woman lawyer has participated was the trial of James Gillespie for the alleged murder of his sister, Miss Elizabeth Gillespie, at Rising Sun in December 1903.  In the trial which followed, in 1904, Gillespie was defended by Capt. J. B. Coles of Rising Sun, ex-Congressman F. M. Griffith of Vevay and Miss Cynthia Coles, daughter of Capt. Coles.  Although Gillespie was sentenced to prison for life, his attorneys have since secured his freedom by a ruling of the Supreme Court reversing the decision of the lower court. Both Capt. Coles and Mr. Griffith give much of the credit for their final victory to the modern Portia who assisted them.  For weeks and months she worked incessantly on the case.  In 1906 Miss Coles was married to W. G. Sink, then recorder of Ohio County, of which Rising Sun is the county seat, but she found her law practice too large to abandon and she is still a member of the firm with her father.  She graduated from the Rising Sun High School in the class of 1895 and at once set out to fulfill her lifelong ambition — to become a lawyer.  Though her father tried to persuade her otherwise, she began the study of law in his office, and when he saw the rapid progress she was making he sent her to the Indiana Law School of Indianapolis. She graduated in the class of 1901 with high honors.”

+++++“Miss Cynthia Coles of Rising Sun, Indiana, was here Sunday in company with Fred Egelston in Ethridge.  Miss Coles, who is a lawyer by profession, has filed on a homestead not far from Ethridge and is highly pleased with the prospects and opportunities in this part of the west.  ‘Many of my friends back in Indiana are greatly interested in this part of Montana but few seem to have the courage to go so far from home; however, I am certain that there will be a movement from that part of the United States this fall, provided the Montana crops prove nearly as good as they did last year . . . .'”

+++++“Miss Cynthia Coles, a bright and successful lawyer from Rising Sun, Ind., came out to Ethridge last spring and filed on a homestead. Miss Coles completely succumbed to ‘the lure of the plains.’  She is now on a visit to her old home.  In the following clipped letter to her home paper, she tells how she had to break a resolution not to talk too much, lest the wise heads at the corner grocery might conclude that ‘someone was lyin’, gosh durn it.’
+++++‘My good resolution to emulate the Sphinx was shattered at the inception.  Mr. Ben Carter, a homesteader near Ethridge, give me samples of his winter and spring wheat, flax, oats, and timothy, and their excellence attracted attention and favorable comment all the way down on the train and even on the bus in Chicago and so I got “wound up” and have talked Montana almost constantly and displayed the bouquet to all who would look and listen.
+++++‘Rain has been plentiful in Montana, hail almost unknown — and the bountiful crop is now ready for harvest hands.  Last Sunday Enquirer had an ad in the R. R. news for hands to help harvest the crops, offering to furnish the names and address of the farmers in the North West who need help.
+++++‘Go west, young man, to west, continues to be good advice.  Montana is rightly name the “Treasure State” and I found the climate in summer ideal and the air dry, light and invigorating.'”