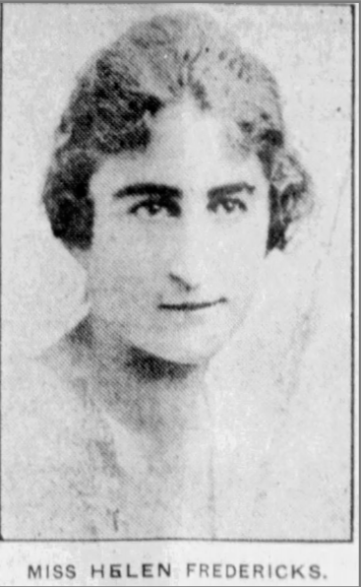 University of Montana School of Law, Class of 1920

+++++“Miss Helen Fredericks, L.L. B., is the fifth young woman to receive a degree in law at the State University of Montana. Miss Fredericks, who is a Missoula girl, a daughter of Mr. and Mrs. S. Fredericks of University Avenue, was a member of the class of 1920 at the university and was recently admitted to practice by the state supreme court in Helena.
+++++She entered Missoula high school with the class of 1914, but did not complete her high school work until after entering the university in 1915, where her high school credits were completed.
+++++Miss Fredericks expects to start her practice with office work, and later go into the trial of cases in court. It is possible that she may decide to take further law work at Columbia university, New York, where she would work toward the degree of master of laws.
+++++The first woman law graduate at the university here was Miss Bernice Selfridge of the class of 1915, who is now Mrs. L. E. Forbes of Ronan. The other three law graduates who were women were all members of the class of 1915 [sic 1918]. They are Mrs. Jane Bailey, who is a practicing attorney and county probation officer in Missoula; Mrs. John McKinnon, Jr., nee Edna Rankin, of Stevensville; and Miss Frances Garrigus, who died of influenza while she was serving as a volunteer nurse at Red Lodge, Mont., during the epidemic.”

+++++“Helen Fredericks, a well known Missoula girl, who was recently admitted to the state bar, received her baptism of legal fire yesterday when she filed habeas corpus proceedings in the district court to have Mrs. Jack Gould released from the county jail. She was sentenced to serve 25 days in the county jail by Judge Bonner for creating a disturbance.
+++++It is probable that Alva Baird, deputy county attorney, will fight the proceedings. In that case it will be classmate against classmate, for both are graduates of the State University law school.”

“Woman Roughrider is Let Out of Jail

+++++Missoula — “Through her attorney, Miss Helen Fredericks, Mrs. Jack Gould was released yesterday afternoon on a writ of habeas corpus from the county jail, where she was sentenced to serve 25 days by Judge Bouner for creating a disturbance. Miss Fredericks handled her first case credibly, demonstrating her ability as a lawyer. Alva Baird, deputy county clerk and a classmate of Miss Fredericks, was the opponent of the fair Portia.
+++++According to Mrs. Gould, better known as ‘Tex Haynes,’ having ridden at rodeos and wild-west performances at county fairs all over the northwest and southwest, she had not been drinking the night she was arrested, but stayed with her husband, who had been drinking, in order that she might keep him out of trouble.
+++++Referring to the trouble her husband had gotten into recently, Mrs. Gould stated that he was suffering from shell-shock, and when these spells or disturbances came on, she claimed, he is more or less irresponsible.
+++++Mrs. Gould says she comes from a good family in Texas, where she was born and spent her childhood, all members of the family being good riders and familiar with ranch life. As a rider she is absolutely fearless and has received favorable commendation for her work wherever she has performed. She married Jack Gould shortly after his return from the war.”

+++++“Miss Helen Fredericks and Miss Inez Strand who have been employed in the office of the attorney-general, left last night for Great Falls where they have accepted legal positions.”

+++++“Very few women have graduated from the law school, but all who have received degrees from this college have had good standings. Helen Fredericks, who received her degree in law, graduated with the highest average of any student in the school’s history. She has worked as law clerk in the office of the United States District Attorney J. L. Slattery, and previous to that she was connected with the office of Attorney General Wellington D. Rankin.”

+++++“The most recent addition to the list of ex-Montana lawyers is Miss Helen Fredericks of the legal department of the Irving National bank. Her experience here would seem to indicate that if a westerner wants a job in New York all that is necessary is to mention the job desired. After refusing several not to her liking, she wrote to three of the largest banks in the city, giving credentials and suggesting that her services were much to be desired. She had answers from all of them and chose the one that suited her best. Her position has great possibilities as the Irving National is just completing a merger with the Columbia Trust company.”

+++++. . . . “Miss Fredericks is a graduate of the State University law school and was the first woman to handle a legal case in the Missoula county courthouse. She was associated for a number of years with the United States district court and since establishing her residence in California she has engaged in legal work. She is a junior lawyer associated with the American Bank of Los Angeles at the present time.”