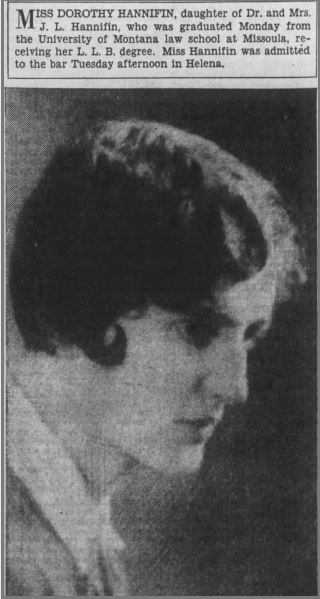 +++“While the number of women in the work force was growing in the 1930s and 1940s in Butte, not many were running their own businesses.
+++Dorothy Hannifin was an exception to the rule.
+++Dorothy, with the help of her sister, Lucile, was a successful businesswoman in the Mining City — running Hannifin’s Jewelry for nearly 40 years.
+++An accomplished scholar, the Butte woman in 1932 became one of the youngest law school graduates at the University of Montana.
+++But her legal pursuits were short-lived.
+++A practicing lawyer in Butte and oldest child of Dr. John and Mary Hannifin, the Butte native took over the failing business of Towle-Winterhalter & Hannifin Jewelry following the death of her father on June 1, 1935. Only 25 years old, her career as a lawyer had come to an abrupt end.
+++‘Dorothy was a pioneer in the business world,’ said longtime friend Sheri Broudy of Butte, who met the Hannifin sisters when she was a girl. She noted, from stories heard through the years, that because of the Depression, the jewelry business was not doing well at the time of her father’s death.
+++‘Dorothy just stepped in and learned by trial and error,’ Broudy said. ‘She pulled that business up by its boot straps.’
+++‘The business was in very poor financial condition,’ said another longtime family friend, Ann Simonich of Butte, who also worked for a time at Hannifin’s. ‘For the first five years after she took over,’ Simonich noted, ‘Dorothy did not take any salary.’
+++Leaving a promising law career to take over a failing business was typical of Dorothy.
+++‘Dorothy just felt it was her duty to help out,’ said Simonich, who described her friend as a very intelligent woman. ‘She took charge of the business and was very successful.’
+++In December 1942, the illness and subsequent death of their mother, Mary Hannifin, would bring Lucile, then a postulate in an Oregon convent, back home. She never returned to the convent.
+++According to Simonich, Lucile, who had graduated from Immaculate Heart College in Los Angeles, remained in Butte at the request of her sibling.
+++‘Dorothy told me she was very lonely,’ recalled Simonich, ‘and asked Lucile to stay home.’
+++So began the partnership of ‘Dot’ and ‘Luie,’ nicknames they had given each other.
+++With Dorothy at the helm, for the next 32 years, the sisters ran Hannifin’s Jewelry, which was located at 109 N. Main St. The business would become famous throughout Montana.
+++Cheri Foss of Missoula, who worked in the store as a teen-ager in the mid-1960s, recalled the store’s beauty.
+++‘It was filled with many items I’m sure I would never have seen or heard of if I hadn’t been able to work there,’ she said.
+++Foss noted that the sisters loved their store.
+++‘They were so friendly, caring, knowledgeable, and willing to spend time with customers and employees,’ she said.
+++Both Simonich and Broudy agreed that Dorothy was largely responsible for the business’ success.
+++‘Dorothy was the cog in the wheel,’ explained Simonich.
+++Broudy recalled that Lucile, who was an accomplished pianist, would help out and work part-time in the store.
+++‘Her real role, however, was to keep the home and cook,’ Broudy said. ‘Dorothy was in every sense the businesswoman.’
+++Foss fondly remembers both sisters.
+++‘Dorothy was efficient, organized and expected the same of her employees,’ Foss said, who also recalled that Lucile, described as the more flamboyant sister, ‘loved to talk, tell stories and laugh.’
+++A former Butte resident, the Rev. Kevin O’Neill of Kalispell knew the Hannifin sisters since he was a child.
+++‘Dorothy and my dad were great business friends,’ said Father O’Neill, whose father’s business, The Toggery, was located next door to Hannifin’s.
+++He remembered Lucile as a ‘playful spirit,’ and Dorothy as being ‘articulate and confident.’
+++While business was a top priority for the Hannifin sisters, traveling took a close second. The siblings traveled extensively throughout the United States and Europe.
+++Simonich noted that Dorothy was an excellent photographer and would show slides of their travels.
+++‘She (Dorothy) would narrate everything and make you feel like you were right there with her,’ Simonich said.
+++Their Catholic faith played an important role in the sisters’ lives.
+++‘They were very proud of their connection to St. Patrick Church,’ said Father O’Neill, a former pastor there, who described the two as ‘pillars of the church.’
+++The Hannifin sisters retired in 1977, but remained members of several Butte civic organizations. In addition, Lucile spent her later years helping children prepare for their First Holy Communion, and Dorothy served as a lector at St. Patrick’s Church.
+++Despite their personality differences, the siblings were always extremely close.
+++‘You never thought of one without thinking of the other,’ Father O’Neill noted. ‘They were truly, truly inseparable.’
+++That closeness was never more evident than in the early 1990s, when Dorothy began to develop signs of senile dementia.
+++Broudy and Simonich both felt that Lucile made excuses for her sister’s failing memory for three years.
+++‘As long as she was able to, Lucile protected Dorothy,’ Father O’neill agreed.
+++Lucile died on July 10, 1997.
+++Simonich felt that Dorothy was only vaguely aware of Lucile’s death. However, she recalled an instance months later while visiting her friend at the nursing home, Dorothy looked up and asked, ‘Did Luie die?’ When she nodded yes, Simonich said that Dorothy became very quiet.
+++Dorothy followed her sister in death on Feb. 2, 1999, and was buried with Lucile in the family plot at St. Patrick Cemetery.”

+++++“Dorothy M. Hannifin died Tuesday in Butte.
+++++She was born in Butte, the daughter of Dr. John L. and Mary (Moran) Hannifin. Dorothy spent her entire life enriching the community she proudly called home.
+++++An accredited scholar, she was a graduate of Reed College in Portland, Ore., and the University of Montana School of Law. She was the second female admitted to the Montana Bar Association following Jeannette Rankin [this is not accurate], and the youngest graduate of the University of Montana School of Law.
+++++Dorothy and her sister, Lucille, operated Hannifin’s Jewelry Store on North Main Street. It was Dorothy’s standard of integrity and her keen sense of business that made Hannifin’s famous from the East to the West Coast.
+++++She was preceded in death by her parents, Dr. John and Mary Hannifin; sister, Lucille; her brother, John; and many dear relatives and friends. . . .”

+++++“. . . The program ‘Woman’s and Juveniles’ Courts’ was in charge of Miss Dorothy Hannifin, popular young lady of Butte. Miss Hannifin is a graduate from the law department of the University of Montana and is popular in both the business and social circles in this territory.”

+++++“With some readings and address, honor was paid to St. Patrick by Butte women of Irish birth or descent and their friends at a banquet in the Silver Bow club last night.
+++++About 200 were present. Miss Dorothy Hannifin, talented young attorney, discussed ‘St. Patrick, His Day, His People, His Land.’ . . .
+++++In concluding a dramatic talk, Miss Hannifin said:
+++++‘If I were a poet I would touch the heart of humanity with a threnody of Ireland’s wrongs and Erin’s woes. I would weave the shamrock and the rose into garlands of glory for the Emerald Isle, the land of martyrs and memories, the cradle of heroes, the nursery of liberty.
+++++‘If I were a painter I would make the canvas eloquent with the deeds of the bravest people who ever lived, whose proud spirit no power can ever conquer, and whose loyalty and devotion to the hopes of free government no tyrant can ever crush. And I would write under the picture,”Ireland.”‘”

8 January 1942 — Montana Standard — “Talk on Table Silver is Heard by College Alumnae”
+++++“Dorothy Hannifin presented a talk on table silver at the monthly meeting of Butte circle of the St. Mary College alumnae, Leavenworth, Kan. . . .
+++++Miss Hannifin illustrated her lecture by showing the different patterns and types of silverware appropriate to the different periods from the Renaissance to the present time. She also showed how the defense program was affecting the work of the silversmiths.”

+++++“The Junior league of Butte will meet Monday evening at 8 o’clock at the Hotel Finlen. Miss Dorothy Hannifin will speak on ‘Legal Rights for Women.'”