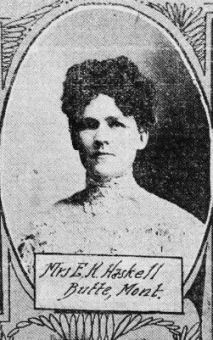 +++++“Miss Ella Knowles, 28 years old and a ‘lawyeress‘ was elected ‘attorney generaless’ of Montana, at the last election, the only one of her kind on earth.” [Apparently, for a little while, it was believed that Ella Knowles had won the election for Attorney General of Montana in 1892; she did not; Henri Haskell did.]

+++++“Miss Barkalow, the St. Louis lawyeress, is twenty-two, a buxom and amiable lady.”

+++++“‘Mrs. Carolline Dall, authoress, has her Winter home at Georgetown, D. C.’ — Boston Globe.  And Julia Moore, the poetess, is in Oshkosh; and Mary Walker, the lawyeress, is in Washington; Eliza Pinkney, the advertiseress, is dead; and Susan B. Anthony, the workeress, is abroad, and we only have a singeress, a couple of painteresses, a rideress, and several walkeresses to make things cheerful for us at home. — Life.”

+++++“Though the female lawyer would probably be the first to resent any appellation distinguishing her from her brethren at the bar, that kind of practitioner has not yet become so common as to warrant grouping under the same general term which indicates the usual legal expert. So long as ‘authoress’ holds its place in the language there will be warrant for calling a woman learned in the law a lawyeress. . . .”