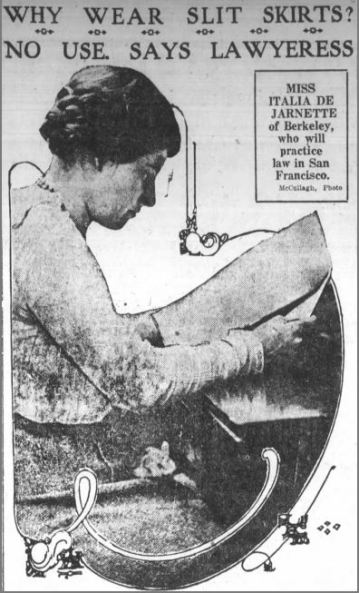 +++++“Why Wear the snugly — yes, too snugly-fitting costumes of modern fashion? Slit skirts and ungainly styles never made a good lawyer.
+++++So says Italia de Jarnette, one of the very few California girls who have taken up law as a profession.  Miss de Jarnette says that the ideal costume is the divided skirt and the ‘middy blouse.’  The youthful Portia, when she isn’t delving into the musty tomes of the law, is busy devising newer and freer dresses.  Who can tell whether the consignee has a better right than the the mortgagor, or whether the habeas corpus law is superior to that of eminent domain, or that regulation is designed to have a soporific influence on predatory corporations, when she’s too busy trying to sit up in a skirt that’s too tight?  No one, says Miss de Jarnette.
+++++The young lawyer is a graduate of the University of California and has achieved considerable fame as an athlete as well as in the fields of law.  She is a horseback rider of note in Berkeley and was a champion fencer in her sophomore year in the university.  She has written books, stumped the country for women suffrage, ‘swung’ real estate deals, and in fact, has done almost everything but wear a hat.
+++++‘Hats are nuisances,’ she declares. ‘I never wear one. What’s the use?’  When Miss de Jarnette isn’t busy with other things, she raises mocking birds, and has a large collection in her home in Berkeley. She will in August enter a large law office in San Francisco.”